Unit 1   Sports for Everyone

例文)
I have played tennis a few times.
John  has watched baseball  in the stadium twice.
Kite has never been to Foreign countries before. ( go → been )
Diana has made cakes and cookies for us many times.
You have bought a tennis racket for me once.
Her father has once sent messages to his family from America  .
I have tried a scuba diving four times.

Words and phrases
What does this word mean?  It means “～を意味する”.
What kinds of dish do they want to have in Japan?  They want to have sushi and tempura.
Which sports applies to the athletes? Wheelchair rugby applies to them.
What kind of music are you interested in? We‘re interested in classical music.
What kind of music is interesting to you? Classical music is ( interesting to us).
Choose( Select ) one from the list below( above )?

経験～したことがありますか ever  never  once  twice  ～ times   many times   before

Grammar( 基本文 )
Have you ever seen the Paralympic Games?
Yes, I have. I have seen them a few times.
No, I haven’t. I have never seen them before. ( No, never. )

Have you ever been to Kyoto?
Yes, I have. I have been there twice.
No, I haven’t. I have never been there before. ( No, never. )

Words and phrases (語句)
We played lots of baseball games in the Stadium last year.
Let’s check it out on the internet.
I’m a big fan of the Yomiuri Giants.
They are one of the most strongest basketball teams in the US.
You should practice harder if you want to be a better player.

Jim: People in our country eat the most chocolate in the world.
Koji: I heard that chocolate is made from cacao. But cacao isn’t grown in Ireland.
Jim: That’s right. Please look at data A. These are all in English. But data B shoes that all the cacao that that people eat comes from *tropical regions and countries. Do you know why?
Koji: I think that cacao grows well in high *temperature. And it needs a lot of rain.
Jim: You’re right. I learned that most cacao used in Japan comes from ① *Ghana in Africa. Ghana grows more cacao than Region Ⅱ. And one country in Africa grows more cacao than Ghana.
Koji: Oh, that means people in Africa can eat a lot of chocolate.
Jim: No, no. There are people in Africa who have never eaten chocolate.
Koji: Really? I can’t believe it. People in Africa grow the most cacao in the world, right?
Jim: Yes, but here’s a ②a problem.  In Africa, many children cannot go to school because they have to work on cacao *farms for their families. grow
Koji: I didn’t know that. Our volunteer club should start doing something for those children.
grown ← grow   栽培する、育つ Europe ヨーロッパ tropical 熱帯の temperature 気温 Ghana ガーナ farm(s) 農場 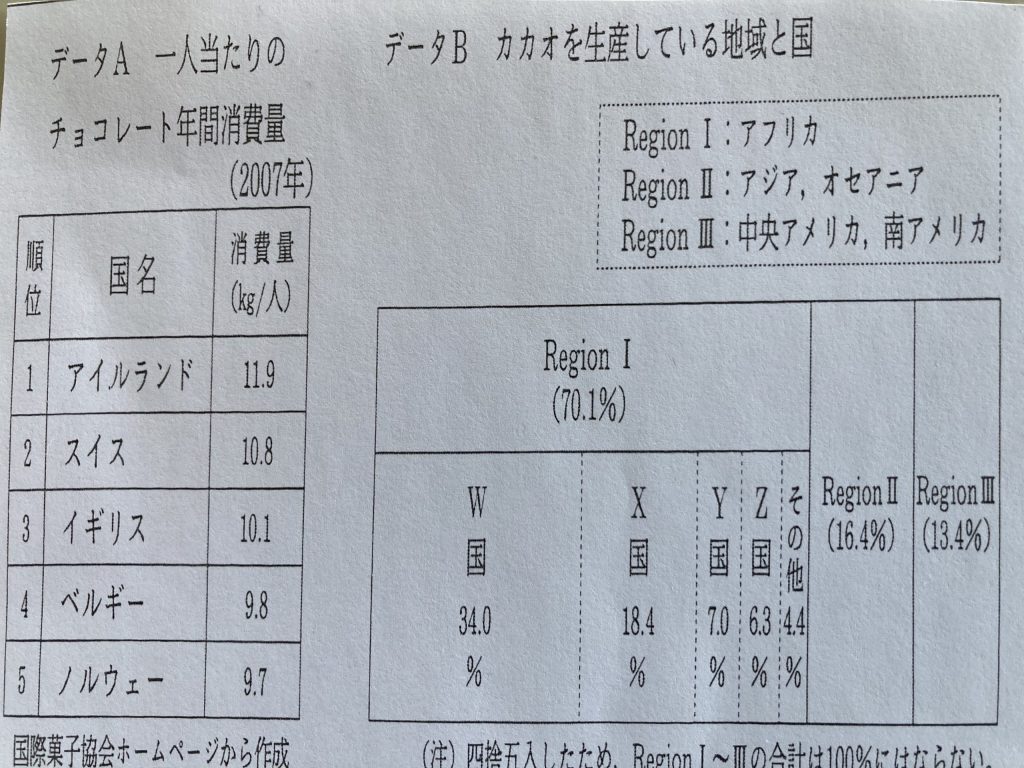 (1) 下線部①の国は、データBのW～Z国のどれですか。1つ選び、W～Zの記号で答えなさい。
(2) 下線部②は、具体的にはどのようなことですか。対話の内容に即して日本語で書きなさい。
難(3) データや対話の内容にアウものを、次のア～オから2つ選び、記号で答えなさい。
ア The people who eat the most chocolate in the world live in Europe.
イ The countries in Africa grow more than 80% of cacao in the world.
ウ Many people in Ghana eat chocolate as much as Japanese people.
エ People in the tropical regions are good for growing cacao.
オ Koji and Jim have helped many working children in Ghana.