Have you ever been to Hawaii? Hawaii is one of the most famous and popular tourists spots for Japanese people. Hawaii lies in the north-western area of the Pacific Ocean and has a lot of islands. Maybe you have heard of O’ahu island because famous Waikiki beach is there. If you interested in the study of stars, you may know something about Big Island ( Island of Hawaii). A big *telescope named Subaru is there. Many stars have been discovered with it. Today, there are more than one million people living in Hawaii and about ten million people visit Hawaii every year. (1)-A□ The oldest islands in the north of the area were formed about five million years ago and the new ones in the south were formed only 500,000 years ago. For a long time,   (2)【 ① lived / ② no / ③ on / ④ or / ⑤ people / ⑥ there / ⑦ were / ⑧ who 】visit Hawaii every year. It is said that the first people who discovered Hawaii were *Polynesian people. Think  of a big triangle in the Pacific Ocean. One corner is at New Zealand. 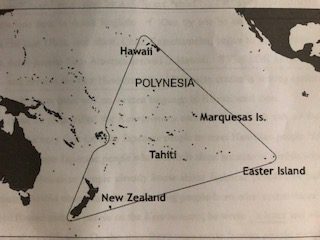 another is at Easter Island, and the other is Hawaii. This big Triangle is called Polynesia. Of course, most of this area is ocean, but the Polynesian culture covers an area. three times wider than Europe. (1) – b □ This is as far as the *distant between London and Beijing., the capital of China. So it sounds very difficult to fnd such small islands in the middle of this big ocean. A study says that the first people who discovered Hawaii came from the  island of *Marquesas during the 5th century.  They lived on Marquesas Islands happily. However, they needed new land because their community grew large and their islands became too crowded. So, some of them decided to leave their home. They are very good at *sailing because they often left their island to get fish for food. They have simple but very good canoes. The canoes were made of two boats joined with a wood stage. Usually, three or four canoes traveled together an, in each canoe, there more than fifteen people. The group of people were large enough to start new life in a new place. When they started their trip, they thought carefully about the course. They also knew so much about stars that they could tell which way to go even at night. In the dark, they made a loud sound to show where each other was. (1)-c □ To find new land, they looked for hints. If they found flying birds in the sky or *floating leaves on the sea , they were almost there.
In this way, Polynesian people first landed on the new world and they called the place Hawaii. The name Hawaii came from the word “Havaiki”. In the Polynesian culture, there was a place that all people came from and would go back to  after death. That was “Havaiki” Over the years, They spread out all over the main Hawaiian islands. Only a little is known about their customs and ways of life. However, we now know that they were the only people who lived there for several hundred years until *the Tahitians landed  around the year 1000. For the next few centuries, each landed was ruled by a different *chief. (3)アThey opened schools and taught the Hawaiians how to  speak English. イ One by one he started to rule each of the islands.  ウ In the late 1700s, one chief, Chief Kamehameha, began to have power. エ Ten years after that, some people from America arrived in Hawaii. オ By 1810, he took control of all those islands and became the first Hawaiian King. They also created a writing system for the Hawaiian language because there was no written language in Hawaii until then.
In 1860, a Japanese ship called the Kanrin-maru came to Hawaii. It was on the way to America. This was the very first time for Japanese people to meet Hawaiian people *officially. Before this, there were some Japanese who lost their ships because of terrible weather and came to Hawaii. So, Hawaiian people already knew about Japanese people and had a good impression of them. At that time, Hawaii was inviting people from other countries as works. When the king of Hawaii met the people on the Kanrin-maru, He wrote (4)a letter.  On the ship, there were some famous people such as Katsu Kaishu, the captain of the ship, and Fukuzawa Yukichi, his * follower, and Nakamura Manjiro, an *interpreter For some reasons, Manjiro lived in America for many years when he was young, so he spoke English. When they returned to Japan, they handed the letter to the government. At that time Japan experienced a great chance. The Japanese leaders who received the letter were so busy that they didn’t have enough time to think about what to do with the letter. However, in 1868, 153 Japanese people were sent to Hawaii to work in the sugarcane fields. This was the beginning of Japanese people living Hawaii.  As many as 29,069 Japanese people moved to Hawaii by 1894, and almost 190,000 people followed over the next thirty years. * According to a report, in 1930, 42.7% of all the people who lived in Hawaii were Japanese. Even today, more than 180,000 Japanese people live in Hawaii and they are the third largest group living there after after white people and *Filipinos.
When Japanese people began their lives in Hawaii. they faced a lot of difficulties mainly because they could not speak English. However, they worked not only with each other but also with local Hawaiians and other foreign people in Hawaii. Thanks to their efforts, little by little, Japanese people became members of Hawaiians community. Now (5) you can see the fruits of their efforts in Hawaii. For example, you can see Japanese temples and shrines in Hawaii. If you need lunch for the day, you can buy bento or musubi at any supermarket. So we can say some Japanese traditions have become part of Hawaiian culture. You can feel not only Japanese culture but also other foreign cultures mixed in the Hawaiian community. This is because many kinds of people have come to these islands through its history. So, Hawaii is the most wonderful places in the world. There, There, different kinds of people live together in peace. In Hawaii, you can enjoy more than just beautiful beaches.

［問1］本文の流れに合うように、(1)-a ～ (1)-c に次の①～⑥の英文を入れるとき最も適切な組み合わせを、下のア～カの中から選びなさい。
① as you know, Europe is a wo\ide area with many countries.
② Do you know how many people visited Hawaii in the past?
③ Do you know who discovered such small islands in the middle of the ocean?
④ For example, it is about 8,000 kilometers between Hawaii and New Zealand.
⑤ Thanks to these skills, they could travel such a long distance.
⑥ They were so brave and full of hope that they could get out of the triangle.

Dear Leaders of Japan,
I am very happy to meet Japanese people.

I am looking forward to your letter.

［問5］ (5) you can see the fruits of their efforts in Hawaii. の説明として、適切でないものを次から選びなさい。

ア  The people who know about Big island are very interested in the study of stars because they can see a lot of stars there.
イ  According to a study, the first people to discover Hawaii came all the way from another corner of the Polynesian triangle.
ウ  The people from Marquesas Island left Polynesia when there were too many people in their community.
エ  In most cases, when people left Marquesas Island, more than 45people traveled together to start a new life in a new world.
オ  During the trip, people in the canoes made a big sound to tell they were getting close to new land.
カ  When Polynesian people discovered the new land, they gave it the name that came from their own culture.
キ  Before the Kanrin-maru visited Hawaii, sometimes Japanese people came to Hawaii to take care of people in Hawaii.
ク  IN 1930, more than 40% of Japanese people lived in Hawaii because a lot of people moved from Japan to Hawaii.

解答 ［問1］オ［問2］オ［問3］2番目 イ 4番目 エ
［問4］例
I would really like to build a good relationship with you.
We need people who work for sugarcane field.
Could you send people for us.
［問5］ア［問6］エ カ