Examples from the textbook
About 870 percent of them (laguages) are used by fewer than 100,000 people.
Chinese is used as a first language by the greatest number of people.
English is used by the third greatest number.
Chinese( English, Spanish ) is used as an official language here.

This English textbook is used by more than 2000 high schools.(受動態)
More than 2000 high schools uses this English textbook.(能動態)
There are fewer than 3000 polar bears in the world.
There are a wider variety of wildlife on the earth.
A great number of people are suffering from poverty and food hunger.
a first language 第一言語
the greatest number of  最も多くの →the second greatest ～ →the third greatest ～

Chinese is used as a first language by the greatest number of  people.(受動態)

English is spoken as a first language by the second greatest number of  people.

Hindi is spoken as a first language  by the third greatest number (of people).

This homework is a piece of cake.  朝飯前

Satoshi : Nancy, I heard you love movies.
Nancy  :  Yes. I enjoyed an exciting movie at the theater last night. I often see movies
in America and Japan.
Satoshi : Are you interested in movies made in other countries? I’ve just found some
interesting *data on the Internet. Look at Graph1. You can see five countries.
(あ) □ makes the most movies of all of them.
Nancy:  Really? Do people in that country often go to theaters?
Satoshi: Let me see. Not so often. Look at Graph2. American people are first, and
French people are second. Then, people in India and (い) □ come *right
after them.
Nancy :  I see. Did you find any thing about Japan?
Satoshi : Japanese people go to theaters only about (う) □ or *twice in a year.
But I think some people watch movies at home.
Nancy :  (え) □ better, to watch movies at home or to see at theaters?
Satoshi : I like to watch movies at home better. Especially American movies.
I can watch the same *scenes many times. So this very good for my English
listening practice.
* data データ right =just ちょうど scene 場面 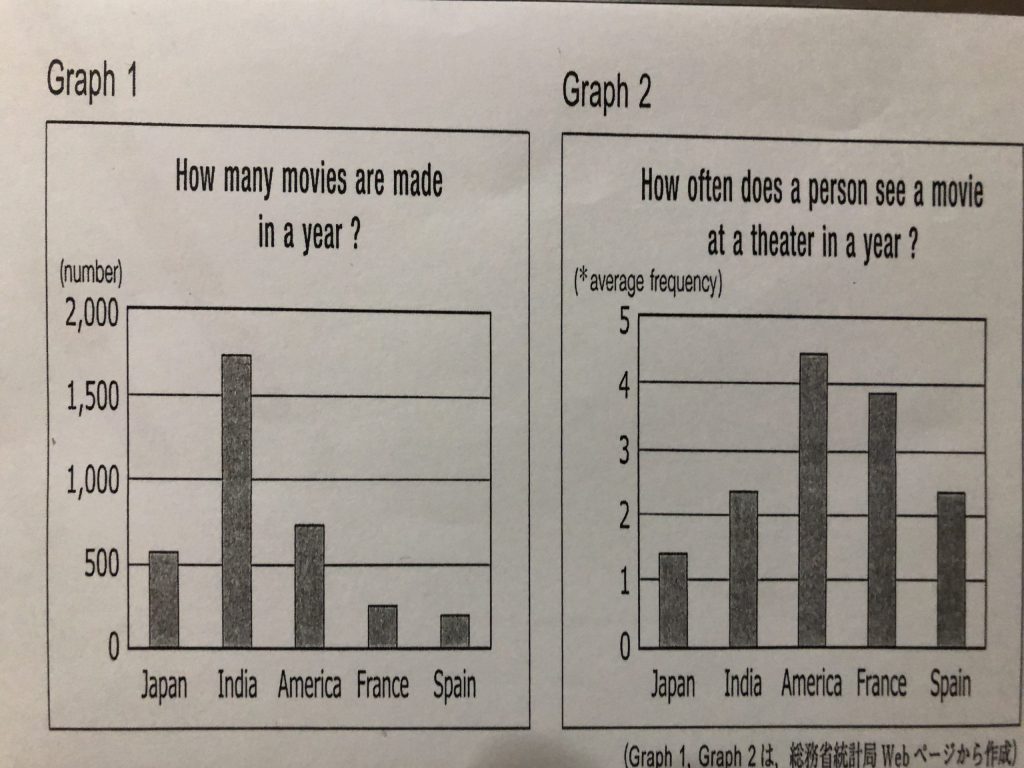